Home > About Us > City Profile

Cabanatuan City is one of the chartered cities of the country today that is at the forefront of the total national effort to insure social and economic advancement. It is an inseparable part of the “Rice Granary” of the Philippines, which has risen as a typical community at the edge of the Pampanga River. At present the potentials of the City of Cabanatuan cannot be discounted as it has made enormous gains in social, economic, physical, political and cultural endeavors.

Several versions account for the origin of the name Cabanatuan, however, three are popularly accepted. One is from the Tagalog word KABATUHAN, which means a place where there is an abundance of stones. The other is KABAN NG TUWA meaning a chest of happiness. And the latest origin to crop up is that the name KABANATUAN was derived from BANATU, a sturdy vine that before amply grew along the swampy banks of Pampanga River.

Whichever of the three versions is correct is not of importance at the moment, for the City of Cabanatuan and its people have lived true to these versions of the origin of its name. Indeed, Cabanatuan has become a sturdy pillar for national growth and advancement, and at present, the people are striving to be more self-reliant-harnessing all potentials as the city is endowed with considerable natural resources; its farmlands are rich and productive; the people are imaginative and hardworking; and the Cabanatueños’ spirit had remained firm and strong.

Majority of the original inhabitants of Cabanatuan came from Bulacan and Morong (Rizal Province). Other early settlers came from Pampanga and Tayabas (now Quezon Province). The firsts barrios of Cabanatuan when it became a municipality were Sangitan, Mayapyap, Talipapa, Samon, Aduas and Cabu. Tagalog inhabited the barrios on the western part while the vicinity around Sangitan was the settlement of Pampanguenos and Ilocanos.

At the turn of the century, the vast Parang District became an area of migration. The sturdy and determined Ilocanos in search of new lands settled in these rich virgin plains, which comprise the barrios of Mataas Na Kahoy, Sapang Kawayan, Belen Balangkare, Talabutab Norte and Sur, Picaleon, Balaring, Sampalok, Platero and Piñahan. The more adventurous groups reached as far as Macatbong, Kalawagan and Kalikid.

Cabanatuan started as a small barrio of the Municipality of Gapan during the term of Spanish Military Governor Colonel Monet. Monet converted it into a pueblo or town in July 14, 1777. At that time, Nueva Ecija was a part of the jurisdiction of Tayabas. Later, when Tayabas was subdivided and the northeastern of the subdivision was annexed to the eastern portion of Pangasinan another territorial section was formed and the province of Nueva Ecija came into being with Baler as its capital.

Towards the end of 1785 the seat of government was transferred to Bongabon and a little after that Cabanatuan became the capital of the province.

A conflagration hit the town in 1816, razing all public buildings to the ground and the capital was transferred to San Isidro, which was then a flourishing municipality. The Recollects then administered the parish until it was turned over to the seculars in 1864. An earthquake destroyed the old church of the town in 1880. Thus, Father Mariano Rivas directed the rebuilding of a new church while Father P. J. La Fuente constructed the parochial house. After recovered from the terrible fire of 1816 Cabanatuan was restored as the capital of the Province of Nueva Ecija.

During the Spanish Regime, the leading town official was called gobernadorcillo. Later, the title was changed to Capitan Municipal.

Under General Manuel Tinio, the people of Cabanatuan responded to the Northern Luzon Central Command of the Filipino Revolutionary Forces in 1896. Later, after the fall of Calumpit and Malolos, both in Bulacan, General Emilio Aguinaldo’s troops occupied strategic positions in Nueva Ecija, with Cabanatuan, on May 9, 1896, as its temporary seat of government until the national capital was transferred to Bamban, Tarlac. Notable names that Cabanatuan contributed to the revolutionary cause were Jose Tombo, Ramon Tombo and Mariano Apan, among others.

In the convent of the Church of Cabanatuan, General Antonio Luna was treacherously killed by Captain Pedro Jonolino, whom Luna previously disarmed at Polo, Bulacan, for insubordination, His aide, Colonel Francisco “Paco” Roman was also killed on June 5, 1899 is now part of Philippine history. The remains of the fallen heroes were said to have been interred in the present site of the Cabanatuan City Supermarket, which was at that time, a cemetery. 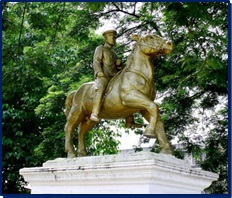 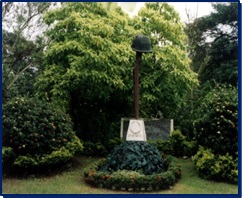 With the advent of American Rule, Cabanatuan continued as a political subdivision and the municipal government began to function in 1901. Since then, Cabanatuan has made great strides in social, economic, cultural, and political development.

The extension of the Manila Railroad line in Cabanatuan in 1904 made the town a pivotal center of trade and industry and the municipality was again made the provincial capital in 1912. Business increased by leaps and bounds but, its steady march to progress was disrupted when the Pacific War broke out on December 8, 1941.

The Japanese Military Forces occupied Cabanatuan on December 29, 1941, and for almost a month, houses and other buildings were put to the torch. So extensive was the destruction brought by the occupation army causing untold sufferings to its people. 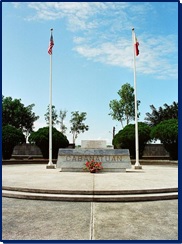 Two places in the City, which are considered as hollowed grounds for being grim remainders of enemy atrocities, are the former site of Nueva Ecija Chinese School along General Luna Street. The members of the underground and those suspected of anti-Japanese activities were incarcerated, tortured, maimed and killed by the Japanese Kempeitai: the other, Camp Pangatian, which before the war was a military training camp for 20-years old. It was converted into a Prisoner of War (POW) camp for survivors of the infamous Death March from Bataan and Corregidor in April-May 1942.

On the night of January 30, 1945, elements of the 6th Ranger Battalion Filipino guerrillas and US Army rescued 513 prisoners from the Camp that included 486 Americans, 23 British defenders from Singapore, 3 Netherlanders and 1 Norwegian. They were remnants of the original army of about 10,000 men in 1942. The rest died of malnutrition, disease and torture while others were moved to others concentration camps.

Soon after liberation, the municipal government was re-established through the joint efforts of the 485th Counter-Intelligence Corp. (CIC) Detachment and the Philippines Civil Affairs Unit (PCAU) No. 3.

The Americans occupied the town on February 1, 1945. Two sets of government were then established with the HUKS organizing their own headquarters and staff, and the Americans, under Captain John L. Evans, reestablishing a civil government with Ricardo T. Jimenez and Ricardo G. Carlos as mayor and vice mayor, respectively.

By virtue of Republic Act No. 526, sponsored by Congressman Jesus Ilagan, Cabanatuan was converted into a chartered city on June 16, 1950. It began to function officially as a city on July 14, 1950 but the official inauguration was held on February 3, 1951.

Cabanatuan today is a metropolis with more than two hundred thousand inhabitants. The city held tremendous promise, not only in its natural resources but also in its potentials in agri - based industries which help sustain its vital role in agricultural production. Commercial and trade activities in the city are further accelerated by the influx of financial lending institutions and new businesses.

Three (3) universities, eleven (11) colleges and fourteen (14) various vocational schools together with public secondary schools provide a wide range of educational opportunities to residents and students from neighboring municipalities and provinces.

Like the proverbial “phoenix” the City of Cabanatuan has risen from the ashes of the June 4, 1980 infamous raid and burning of the City Hall Building (the site was sold to the Central Bank of the Philippines - the Regional Office of the Central Bank was recently constructed there), which wrought tremendous damage to the public and private properties.