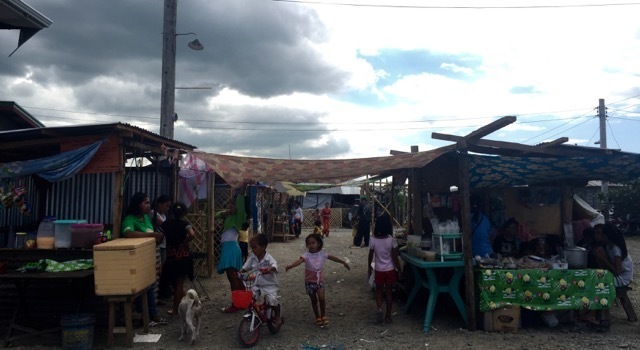 CABANATUAN CITY, Nueva Ecija – More than a hundred Badjao families who fled Mindanao due to conflict and the lack of opportunities in their area used to live in the streets of Cabanatuan City.

They were eventually able to build shanties near a bus terminal, but still faced dire conditions.

In 2013, these Badjao families were finally given a place to rebuild, a place for a decent life.

Some 131 families were given free houses in Barangay Bakod Bayan under the comprehensive program of the Department of Social Welfare and Development (DSWD) for Sama-Badjaos and its Core Shelter Assistance Program (CSAP).

The housing project was done in partnership with the Cabanatuan city government, which purchased the land.

"This community was primarily identified [for] pilot implementation of our project in DSWD, in line with the issues and problems of the Badjao," said Perla Villanueva of the DSWD regional office.

Unlike other relocation areas where provision of basic utilities is a problem, houses in this village are complete with electricity and water.

Water access used to be difficult since there were only 16 water pumps for more than a hundred families. But private firm Solanaland Development Incorporated, a partner of the Office of the Vice President's Angat Buhay community, recently donated 10 more water pumps.

Norayza Abraham, one of the residents in the area, is grateful for the sturdy and decent home given to them. But what she is more thankful for is the livelihood opportunities that came with the new home.

The 42-year-old parent-leader in the community said she used to be among the Badjaos who roam the streets for alms.

(Each family was given P10,000 for livelihood. All of us here have sources of livelihood. We just have different strategies.)

Abraham's husband earns money by selling dry goods such as accessories. She augments their family income by assisting in the community's activity center for a monthly allowance of P2,000.

Other families here have set up sari-sari stores or other small-scale enterprises.

Dwellers were also provided with technical training, such as how to make smoked fish, repair mobile phones, or weave doormats.

"We encourage them to engage in different forms of livelihood. There are those who have sari-sari stores while others have been able to purchase a tricycle," said Villanueva in Filipino.

Since this community is a pilot area, the government continues to study the effectiveness of the program's implementation so that it can be expanded to other parts of the country.

"For many years, they have been roaming around the Philippines and we only have a few families here that have been adopted. Our advocacy is other families in different localities would also be adopted," Villanueva said.