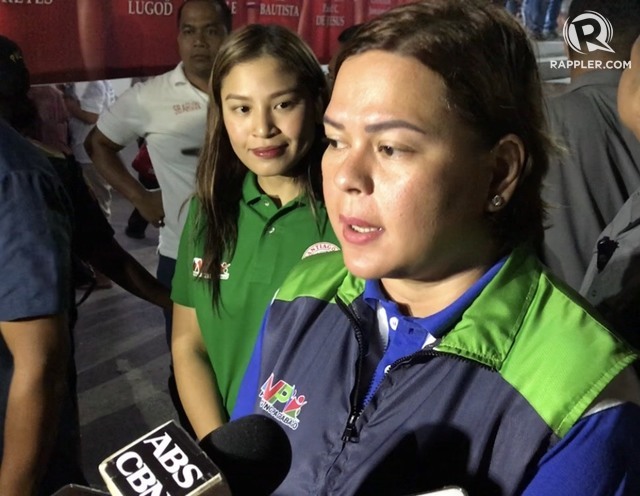 Her statement came after the Otso Diretso senatorial party challenged HNP to a debate on key national issues.

(Our senatorial candidates are willing to debate. Actually, they are active in debates hosted by media outlets.)

The HNP vowed not to engage in "negative campaigning" after Otso Diretso made clear its "anti-corruption" messaging.

(The problem is, those who are criticizing us are not attending debates and forums.)

Among HNP's senatorial bets are former senators Ramon "Bong" Revilla Jr and Jinggoy Estrada, who were detained for years in connection with the multi-billion-peso pork barrel scam.

Revilla was acquitted by the Sandiganbayan, while Estrada is out on bail.

Ilocos Norte Governor Imee Marcos has been exposed as a beneficiary of secret foundations that held ill-gotten wealth from when her mother was a government official. Imee herself has been accused of misusing the tobacco fund of Ilocos Norte.

Around 20,000 people attended the Hugpong ng Pagbabago campaign caravan in Cabanatuan City, according to organizers.

Each town in the province sent representatives to form the crowd at the grandstand of Nueva Ecija University of Science and Technology.

This is the 4th stop of the HNP Senate slate in Luzon this week. Sara Duterte led the caravan.

Tolentino said the crowd was so far the largest among the HNP sorties since the campaign officially started on February 12.

The sortie was organized by the Umali clan, whose members are holding positions now and running for several others in the 2019 elections.

The Umali-led Unang Sigaw political party candidates were present in the campaign, including actor Rommel Padilla, who is running for a congressional seat in the first district of the province.

Former Governor Oyie Umali, in his speech, endorsed the 13-member senatorial line-up of the administration-backed party.