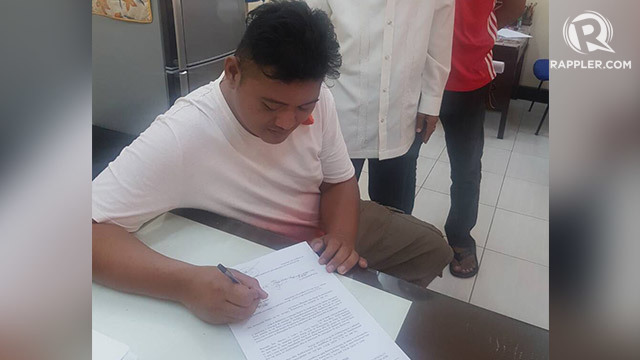 MANILA, Philippines – A regional trial court in Cabanatuan City has ordered the immediate release Friday, June 29, of the suspect in the killing of slain Catholic priest Richmond Nilo.

It was acting Provincial Prosecutor Eddie Gutierrez who filed the "Urgent Motion to Withdraw Information" before the court, which all but cleared Millan of involvement in the slaying of Nilo.

RELEASE. A photo of the order of Regional Trial Court in Cabanatuan City ordering the release of Adell Milan.

RELEASE. A photo of the order of Regional Trial Court in Cabanatuan City ordering the release of Adell Milan.

The RTC order comes after the family of Milan presented proof that he was drinking with friends on the night he supposedly killed the priest in a chapel in Zaragoza, Nueva Ecija.

In the sworn statement accessed by Rappler, Milan wrote that the authorities now have in their custody a certain Omar Mallari who is the Philippine National Police's new suspect in the killing of Nilo.

Milan wrote that he will not file a case against the authorities responsible for his false arrest and assured them not to worry.

(Because the authorities who accused and arrested me are worried that I might sue them for their mistake in arresting me, I am executing this sworn statement / waiver where I am saying categorically that I will not file a complaint with the fiscal or courts or any venue regarding this error or false accusation against me.)

Milan was arrested on June 14 by armed men in civilian clothes just outside his home in San Isidro, Nueva Ecija, after the PNP claimed that he was a match to their composite sketch.

A few days later, Milan’s 78-year-old grandmother, Elena Matias, claimed her grandson was innocent, and that the arrest was done “informally.” (READ: PNP got the wrong guy – grandma of accused in Fr Nilo murder)

In a forum on June 22, Matias faced the media to defend her grandson once more with the assistance of lawyer Lorenzo “Larry” Gadon.

Nilo is the third Catholic cleric to be killed since December 2017. (READ: Father Nilo: Nueva Ecija's hardworking defender of the Catholic Church)